Please see the link above to help out my neighbor and great friend Pam Neff. She was diagnosed with Non-Hodgkins Lymphoma 2 years ago after the birth of her 3rd daughter. She is currently in remission and in good health. We need to find a cure for this because currently there is no cure for this type of cancer. Any donation would be appreciated. There isn't such a thing as a small donation so thanks very much!!!!
Sonia
Posted by a busy mom at 8:41 AM No comments: 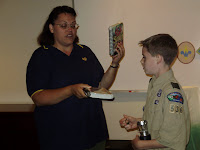 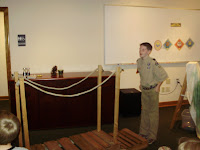 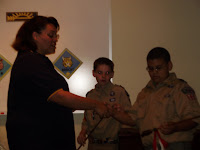 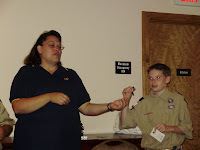 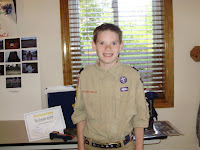 So I'm a little late this time in posting about Sam's birthday. He turned 11 on May 28th. One more year of primary then he will be in Young Mens and have the priesthood- unreal! Sam wanted a sports party so about 20 kids came to a local park and we played all of his favorite games. Flag Football, Volleyball, Soccer, Kick Ball and just ran around having fun.
We are so grateful for Sam and his sweet personality. He is such a huge help to me in the mornings and is willing to pretty much do anything I ask without complaining. He is a great example to his younger sister and brother. Sam is also very talented in sports. He is really good at all of them. I think one day he will get a sports scholarship and play something professional one day.
Sam also has been working hard on his Arrow of Light award and accomplished that. That required a lot of work, but I enjoyed working with him on it. We have some good memories of building things together and fixing things.
Sam has been on the A honor roll all year. We are proud of him. He will be going into 6th grade. Off to Middle School next year.
Sam is currently reading the Lightening Thief Series and finally enjoys reading.
I love my Sam very much and I know time will go by fast now once they are out of Elementary school the years seem to fly by.
Happy Birthday Sam and I'm so thankful for you! 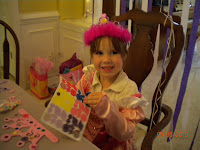 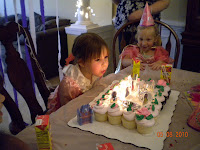 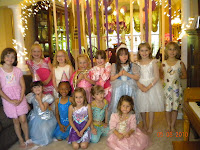 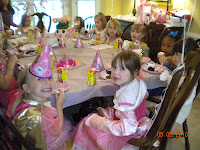 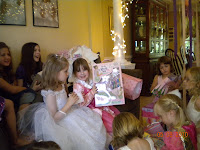 My sweet Eliza is now SIX, where did the last six years go? She has grown so much this past year in Kindergarten. She went from barely writing her name to reading little small books on her own. I was lucky enough to be able to go on 4 field trips with her this year! We went to the Pumpkin Patch, Living Museum, Williamsburg and the Strawberry Patch. It was fun to be able to bond with her this way. The best part is that she didn't ignore me on the field trips like my other kids did-lol!
Eliza has also participated in a lot of different things this year. She tried Fall and Spring soccer. She took up ballet-following her big sister in this area- she was in her first Christmas program which was so cute. Her recital is in just a couple of weeks. She also has taken up swimming lessons again and according to her teachers, she is the "best" in the class and moved up two spots in one session. They want her to join their swim team, but she says "she is just too busy for that!" She is so funny. She will just tell you like it is.
Eliza would kill me if she knew I was writing this but she really likes BOYS! I'm going to have my hands full with her I can tell. She wanted a "star wars" party with all boys, (and I wanted a princess party with all girls) I was finally able to pursuade her to have a princess party! Which was really cute.
I love my Eliza girl so much. She is the "princess" of the house. She basically tells us what to do and for some reason we all give in to her. She still talks about her Connecticut friends to, but I am happy that she has some really good friends here in VA also!
I hope this year brings Eliza much happiness and growth. 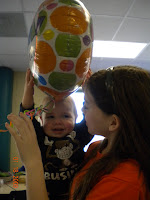 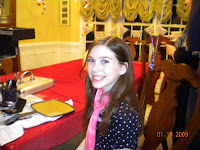 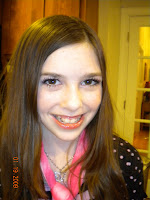 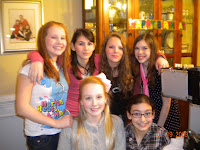 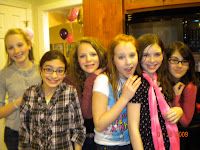 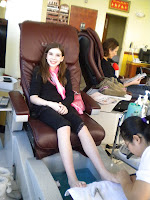 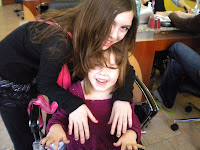 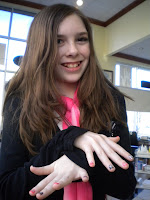 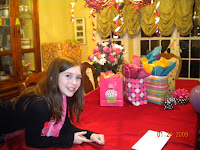 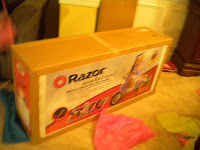 Courtney turned THIRTEEN ON Feb. 21st. We celebrated by having a MAKE-UP party on Friday night. About 6 girls came and a friend of ours is a PROFESSIONAL make-up artist so she came and dolled up all the girls. They all looked like MODELS it was done perfect, not too much make-up but just enough for them to SHINE! Courtney had a blast.
On Saturday she got to go to her first TEMPLE trip, she said it was AWESOME! She got up at 4:30 in the morning and got home about 2pm. Then we treated HER and ELIZA to a PEDICURE AND MANICURE along with my sister and mom. We enjoyed our GIRLY time. We finished the evening with DINNER out. I think COURTNEY had a GREAT BIRTHDAY!


Courtney has accomplished a lot in her short 13 years! The lastest news is that she was nominated to be a part of the JUNIOR HONOR SOCIETY what a huge success. She has maintained a 4.0 GPA through ALL of middle school. She also recently joined the VISIONS which is the TALENTED AND GIFTED program. COURTNEY loves DRAMA....she is LITTLE RED this year in the school play INTO THE WOODS She has been practicing hard to learn all of her parts as it is a LEAD roll.


We are very proud of COURTNEY and she hopes to be a ROCKSTAR one day and I don't doubt that she will make it BIG one day!!!!

we had a GREAT Christmas

I can't believe Christmas has come and gone already- my favorite time of the year. It went by too fast. We did a lot of fun activities throughout the Christmas season, too many to name my favorite but some of the highlights were:
Courtney and Eliza's Christmas program
Christmas Town at Busch Gardens
Rockettes with some really great friends
visiting with friends and then going to see the lights in Hampton
Christmas Eve in Charlottesville visiting family
Christmas Day of course
Day after Christmas my parents came. We missed my sister this year, she didn't make it in.
Baking, time with the family and having Eber home.

I'm sure there is a lot more we did but can't name them all. We also got to enjoy a little snow here in Williamsburg which is unusual for this area!

So as we start the New Year of course I have some goals- they seem to be the same each year but this year definitely get into shape- Eber and I started in the fall and he has lost 15 lbs and I have lost 16 lbs so its a small start but we hope to go to the YMCA more often to work out. I also want more quality family time-so much running around always that we are going to have a schedule of how much TV is allowed each day, or Wii etc.. and have more family time.

Here are a few pictures through out the season. I also hope to blog more-ha.

my four kids as elves

http://elfyourself.jibjab.com/view/hFX5cs3S20GFRfkw?cmpid=ey_fb_self
Posted by a busy mom at 10:42 AM 2 comments:

Long time since I lasted posted! A lot to update!

WOW- where did the months go- It was a fast summer! I didn't know it had been so long since I last updated.

We had a great summer- The kids joined their first Swim Team (Courtney and Sam) the were the "WAVES" They had a great time getting to know the kids in the neighborhood and also feeling more comfortable in the water and learning new swim skills. They both did a great job and earned many ribbons through out the season. Eliza hopes to join next year!

Our main vacation was going to Nags Head with Eber's two brothers and their families- we had a blast. We hope to do this every year. The highlight of that trip was seeing my kids try to drive Go-Karts- not very pretty! It was so funny. I already posted pictures from that trip so if you missed it go back and check those out.
The rest of the summer was spent at Busch Gardens and Water Country, Neighborhood Pool, Parks, Bowling, Movies and some lazy days at home (my favorite-ha) I tried to get the house organized but its back to being a mess already! We also did some landscaping which I got poison Ivy really bad! I had to go to the Dr. twice to get a shot for the pain and itching- it was miserable. The last little trip we took was to my parents house in Wytheville, VA. Its about 5 hours from us. We had a big cook-out with my aunts and uncles and cousins. It was fun to go see their house and to catch up with family.

Now we are back into school. Courtney is in 7th. Sam is in 5th and Eliza is in Kindergarten! Brady is stuck home with me for a few more years. I love having my kids home with me but now at least Brady can get back on a normal nap schedule! Summer was crazy trying to keep the house quiet for him to sleep! The kids are doing great in school. Courtney is back into choir and drama. Sam is taking an after school soccer club, unfortunately for Eliza's age they don't offer any after school programs just yet!

Sam and Eliza are in the county league for Soccer- it is so fun watching their games. They both have won their first 3 games! They also have both made a goal. Sam was goalie this past week for half of the game and he blocked a lot of shots! Eliza loves chasing the ball-sometimes she gets confused and starts doing her ballet moves out on the field though-too funny.

Courtney is in a couple of fall shows for her Dance Revolution Team. She auditioned for a solo and is singing a duet of "Girls Just Wanna Have Fun" She will be doing a dance to "Thriller" also. She is a "dead" ballerina for Thriller!

Brady is still scooting- but he has learned to crawl now (yes he is 14 months old and just learning to crawl!) He stands alone but refuses to walk to us. He walks around the furniture holding on but won't let go. He is so funny. He loves to make us laugh-he laughs at himself, and it sounds like an "old man" its so loud and deep- he's a cutie. Besides the last few nights he finally improved on sleeping, but now he has a cold so he is waking up more.

I love fall time- besides the Christmas season this is my all time favorite time of year. The crisp mornings- great for my morning walks, the leaves are changing and the excitement in the air for

Halloween, Thanksgiving and Christmas coming up. I love pumpkin patches and hay rides etc.. I haven't done much with apple picking but that would be fun too. So enjoy this time of year.... I love it!

Would love to hear from everyone shoot me an email or join facebook! email is eberhoo@hotmail.com

Eliza at the Beach in CT 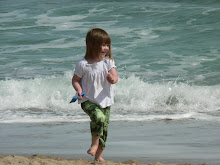